The expression “getting long in the tooth” refers to gum recession connected with aging.  As the gums recede, the teeth look longer.  But not all situations involving gum recession have to do with aging.

Technically, gum recession occurs when the edge gums (gingival tissue) moves away from the crown of the tooth, exposing the root.

We often think of a receding gum line as having to do with age, because the movement tends to be so gradual that it takes many years to become noticeable.  However, in fact, gum recession can begin at any age, even in early childhood.

Any one of a variety of factors can be the cause of this gingival tissue recession. 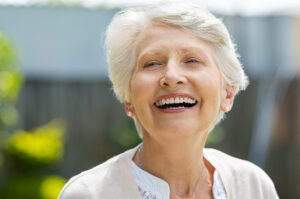 Some people are simply genetically prone to have their gums recede.  Abnormally fragile gum tissue or an insufficient amount of jaw bone to support the gums surrounding the roots of the teeth all the way up the tooth can be inherited problems.

Fortunately, it’s possible to control other contributing factors, so people who are predisposed to gum recession can still work to minimize it.

Chronic teeth grinding is likely to cause a variety of oral health problems, including damage to teeth and gums.  Gums can have a difficult time bearing up against the force of the pressure caused by the clenching and grinding motion of the jaws and the gums may recede.

Bruxism is a habit which can be difficult to break, especially for those who grind their teeth in their sleep.

If you have the habit of grinding your teeth and are finding it difficult to stop, please call for an appointment.  We can help.

Overbrushing:  Too Much Brushing is as Bad as Too Little

Dentists and dental hygienists spend a great deal of time encouraging patients to brush their teeth more frequently. This is good advice, as long as you bear in mind that it’s possible to brush too much.  When teeth are brushed too hard or too frequently it can lead to gum recession and enamel erosion.

Luckily, this problem is easy to avoid.  Soft bristles are far better than hard or medium ones and brushing for two minutes twice a day is plenty. If you see the bristles of your brush bending or fraying within a couple of months, it’s time to go more gently on your brushing.

The same general advice applies to flossing.  Floss on a regular basis as advised by the dentist, but don’t overdo it – treat your gums gently and with care.

Even early stages of gum disease can leave your gum tissue weakened and vulnerable.  In advanced stages, this disease destroys the supporting tissue and bone around the teeth.  If fact, gum disease in the main cause of gum recession.

The best way to fight gum disease is with good oral hygiene habits and regular visits to the dentist.  Professional cleanings are vital to retaining healthy gums, because once hardened into tartar, dental plaque can only be removed by a dentist.  When the tartar remains on the teeth it irritates the gums, causes gum recession.

Even though gum recession is thought of as an older person’s problem, children can also be confronted with a receding gum line.

The causes for gum recession in kids are the same as those for adults.  Make sure your kids brush properly, watch for bruxism, and make sure they visit the dentist regularly.

If you notice your gums are beginning to recede or want to know how to prevent gum recession, give us a call.  We can help you maintain healthy gums and recommend treatment options, if needed.